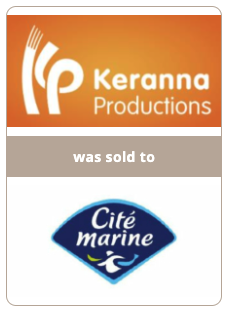 Keranna Productions is a company specialised in the making of fresh and frozen processed products: poultry-based, fish-based and vegetable products. Located in Brittany (Plumelin – 56), Keranna Productions was created in 1998 before being taken over by Agromousquetaires.

Cité Marine, a subsidiary of the Japanese group NISSUI, has become a major seafood product maker since its creation in 1990: cooked fish, shrimps, tapas, and rillettes. Cité Marine is also known for its vegetable products and recently its vegetarian dishes. Cité Marine employs 1,800 people and achieved a €370 million turnover in 2021.

By means of this strategic deal, Cité Marine has owned an eighth production site which will make its development permanent by enhancing its production capacity in a context of expansion of Cité Marine’s markets.

This transaction has safeguarded all 70 jobs on the same production facility and will make possible an increase in production volumes as the maximum production capacity has not been reached yet.

The geographical complementarity of Keranna Productions with Cité Marine, the staff’s quality and the industrial organisation adaptability were key elements in the success of this handover.

AURIS Finance acted as exclusive advisor to the seller and assisted Agromousquetaires in all stages of this transaction.